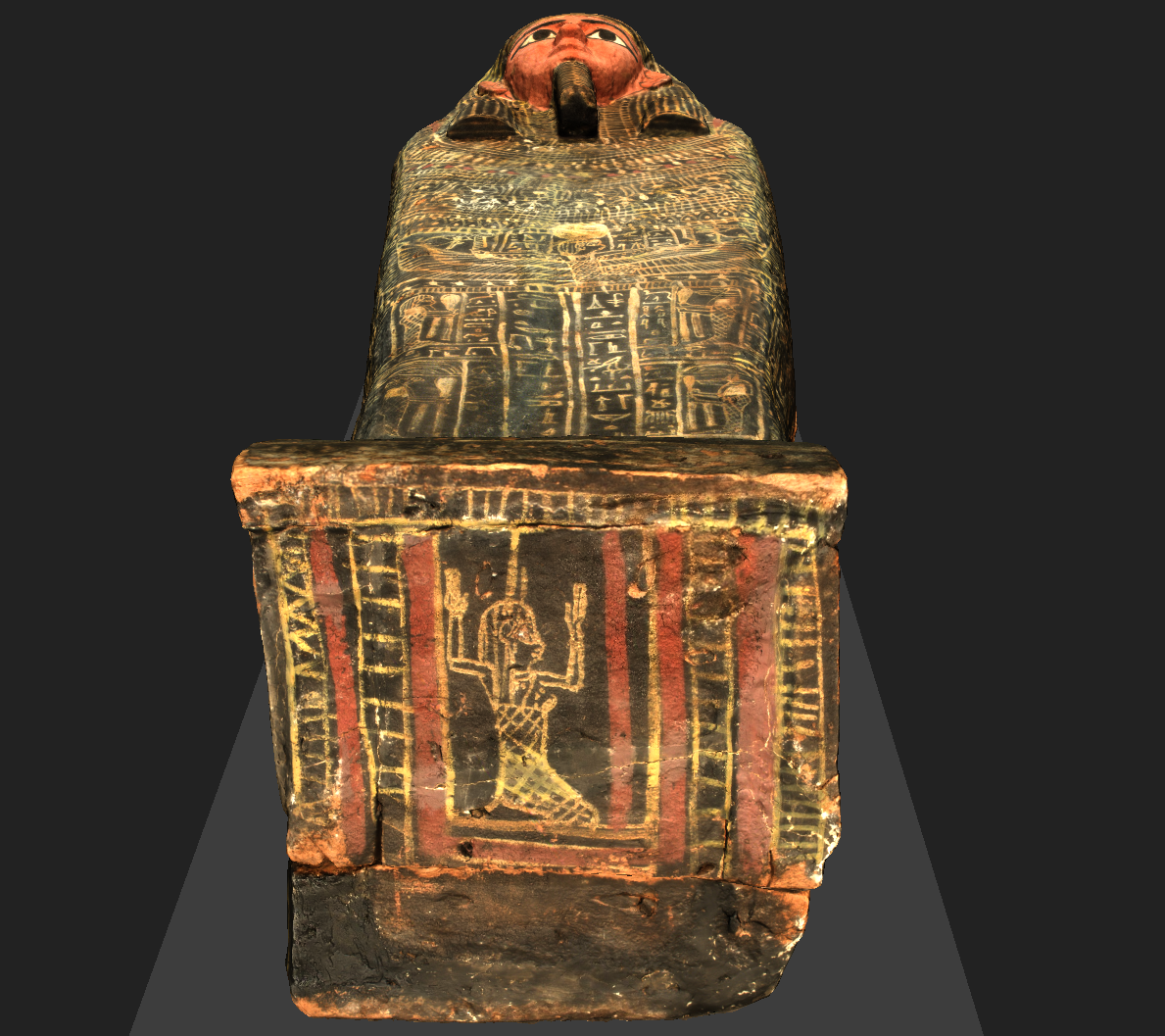 The coffin of Padiusir was bought by the Utah Museum of Fine Arts in 2008. Its collection history gives us little idea of where it originated and when. The answers to these questions must at the moment be reliant on inscriptions and stylistic observations.

The black on yellow color scheme originated in the second half of the 18th dynasty and persisted into the 19th dynasty1. The black probably symbolizes the fertile silt of the flood, and thus rebirth. The yellow is probably a substitute for gold, and can be seen as having solar connotations, the whole scheme alluding to the union of the sun god with Osiris. This color scheme became popular again, albeit with different decorative programs, in the Third Intermediate period at Thebes. It experienced yet another revival throughout the country during the Saite Period, after which it continued into the Ptolemaic. The most well-published later yellow-on-black coffins are Ptolemaic in date and come from Akhmim2, but yellow-on-black coffins are known from the Ptolemaic period at Thebes3, from the Saite period at Saqqara4, and from the first Persian Period at Qubbet el-Hawa5.

Of these, the decoration on Padiusir’s coffin has the most in common with the Saqqara coffin, which belonged to a man named Ahmose. Both have very dense decoration, and use sparing amounts of colors besides black and yellow to highlight details. These similarities, as well as the presence of an attached beard6 on the coffin of Padiusir point to a Memphite or Middle Egyptian origin for Padiusir’s coffin.

From the inscriptions on his coffin, we know that Padiusir was a wab priest, though which god he served is not specified.  The inscriptions give the names of his mother and father: Ta-re7 and Idy8 respectively. The name of his grandfather was originally written on the top of the foot box of the coffin. It is now unreadable, but may have included the name of the goddess Bastet.

This coffin underwent restoration at some point before reaching the Utah Museum of Fine Arts. Large areas of inscription have been completely or partially redrawn as nonsensical squiggles. In many places, traces of the original inscription remain, however, it is often very difficult to tell where the original glyphs end and the modern ones begin because of the careful matching of the shade of the modern paint to the ancient.