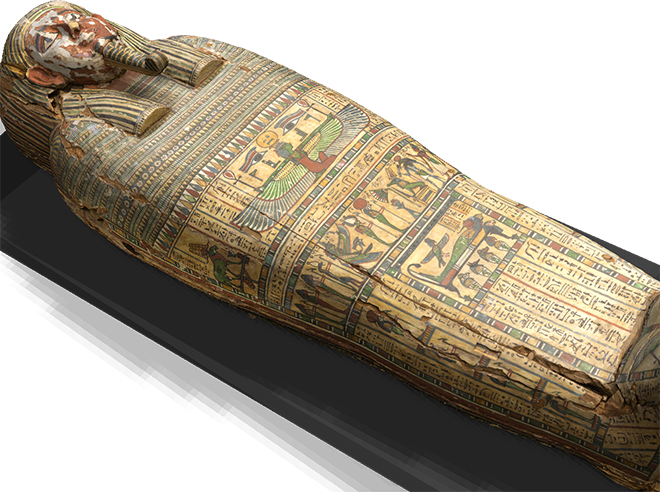 This coffin is part of a nested set of two coffins. The outer coffin can be seen here.

The two nested coffins of Ankh-wenennefer, the innermost of which still houses Ankh-wenennefer’s remains, were purchased in 1891 by Allen C. Mason. Mason was a real-estate developer and entrepreneur whose marketing efforts and infrastructure projects helped to build his home city of Tacoma, Washington. Mason’s record of his purchase survives and tell us that he bought the coffin from the dealer “Moharb Todrous” in Luxor. This is certainly Mohareb Todros, who was a German Consular Agent in Luxor and also a prominent antiquities dealer in a family of Consular Agents/Dealers.1  As for Ankh-Wenennefer, he was not actually from Luxor. The titles on his coffin indicate he held priestly titles in the temples at Akhmim, some 200 km north of Luxor. It seems likely that his coffin was unearthed in the excavations that devastated the large cemeteries of Akhmim in the 1880s.

The coffins (and their occupant) were briefly exhibited in Tacoma at the “Western Washington Industrial Exposition” in 1892—this was a showcase for art, culture, industry…and an advertisement for local businesses.2  They were then donated to the Washington State Historical Society, where they remained aside from some short loans and a 22-year loan to the University of Puget Sound from 1959-1981.

The inner coffin can probably be dated to the timespan between the 26th dynasty and the 30th, according to Ruth Brech’s typology of coffins from Akhmim, in which Ankh-Wenennefer’s inner coffin more or less fits into Type B.3 However, Ankh-Wenennefer has an outer coffin, which is unusual for this type of coffin. The orientation of the mummiform protective deities on the body, which face the central column, are also unusual for this type, wherein the figures are usually rotated 90 degrees perpendicular to the central columns.

As for Ankh-Wenennefer himself, we mainly know what his coffin tells us. He held several titles at Akhmim including Stolist Priest at Akhmim (smAty n Ipw) , and Hm-nTr for Min and Horus-Who-Protects-His Father—two important local deities at Akhmim. He may also have held a priestly office at Dendara.4 His mother’s name is unusual and doesn’t have any parallels that we know of. It seems to be Tatjaw (tA (n.t) TA=w). His father and grandfather were both Hm-nTr priests in Akhmim of the same rank. Their names were Wennennefer and Ankhwenennefer respectively. It is difficult to confirm that either ancestor is definitively attested on another monument--both names are common in the Late Period,5 but Ankhwenennefer of Tacoma may be related to the owner of a coffin in the British Museum, Irethoreru. Irethoreru’s father was a Hm-nTr priest of the second phyle at Akhmim named Ankhwenennefer.6

Though it was not possible to show it in the model, the back of Ankhwenennefer's coffin features a projecting back column like many coffins of this period. On this column is painted a djed pillar. The goddess Nut is painted on the inside of both the lid and basin of this coffin. It is best compared with the coffin of Irethoreru in the British Museum (EA 20745) mentioned above.

Ankhwenennefer’s coffins will be discussed in more detail in Kea Johnston’s forthcoming doctoral dissertation at the University of California, Berkeley, on first millennium BC coffin workshops at Akhmim.