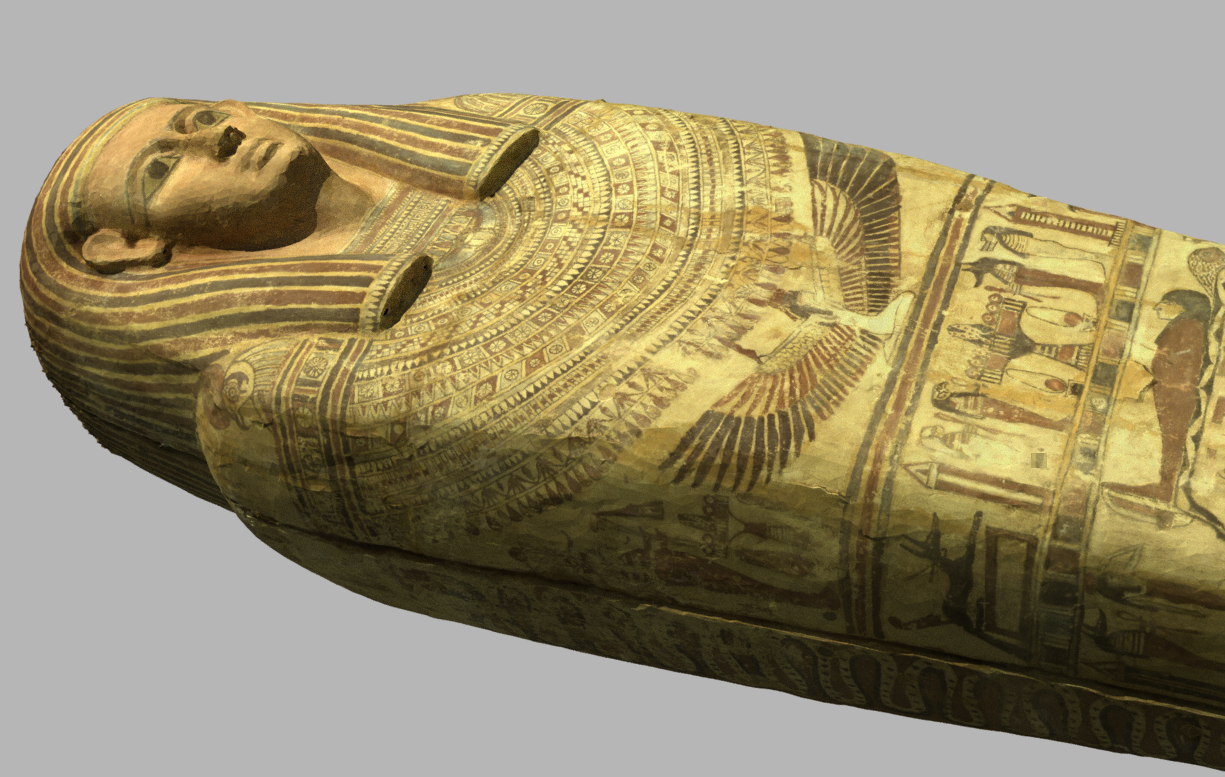 The coffin of Tadinanefer was purchased on the art market by the Rosicrucian Egyptian Museum in 1985. Like most pieces acquired on the art market at the time, its collection history is uncertain. We are lucky that it has some very unusual features which it shares with a group of provenanced coffins allowing us to draw some fairly certain conclusions as to where it originated and the time period in which it was made. Anubis, for example is one of the companions in the solar barque. The scene of the deceased as Osiris on a funerary bier features the usual canopic jars beneath the bier—except the jars are drawn as four heart-glyphs instead of the usual jars with animal heads. The bier itself features the spots of a cow, even though it has the head and tail of a lion. A goddess with a net-patterned dress decorates the entire back of the coffin. These are all iconographic features characteristic of coffins produced at el-Hibeh in Middle Egypt.  In her study on coffins from el-Hibeh, Beatrix Gessler-Löhr outlines the unique iconographical features of some coffins from the site, and dates this specific coffin to the Saite or First Persian Period1. Tadinanefer’s coffin also has a very close parallel in the coffin of Ireteru in Krakow, which features an inscription in similar handwriting2.

The names on the coffin are a little bit difficult to translate because of the way the glyphs are stacked together, and because the filiation of the deceased is expressed as it would be in Demotic instead of Middle Egyptian. In fact, there is a final glyph on the name of the owner that we are still trying to figure out, so the rendering of her name as Tadinanefer is provisional. Her father’s name is likely Pakhered3. Her mother is Ireteru, which is a common name for men and women during the Saite period and later. None of them have any titles.