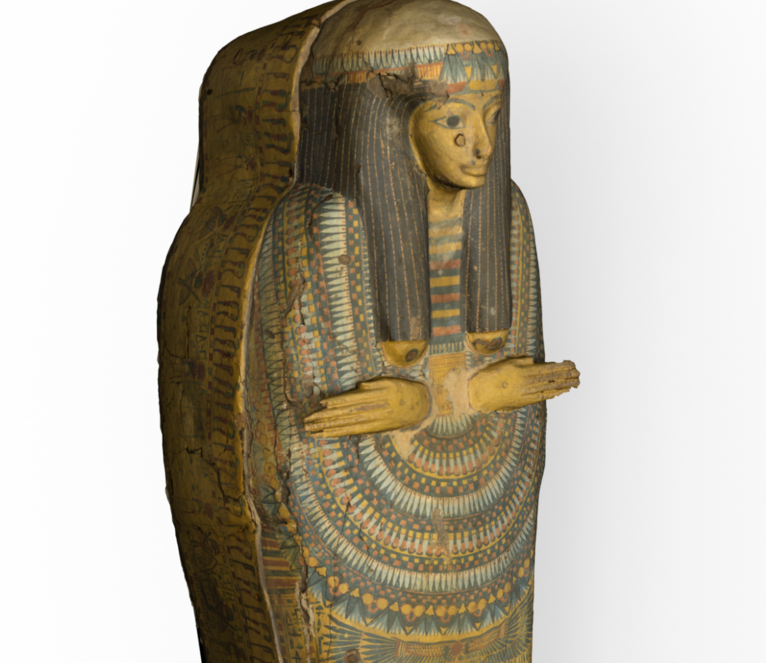 This coffin was purchased Adolph Sutro on his trip to Egypt, probably in 1884. Sutro gained fame and fortune from building a tunnel to drain the water from the mining operation at the Comstock Lode and was a prominent figure in the civic life of San Francisco in the late 19th century. He was also an avid antiquarian, and travelled Europe and the Middle East, purchasing artifacts and rare books for his collection1. This was one of four sets of coffins that he purchased during his trip, and one of two sets to survive to this day. The other is the three-coffin set of Nespaperennub (coming soon). Both sets of coffins survived the 1906 quake and were displayed at the Sutro Baths in San Francisco for over half a century. They were donated to San Francisco State's Museum Studies program mere months before the Baths were razed by fire in 1966.

The decoration and shape of SFSU Global Museum-104.1,104.2 is a provincial variant on a style that was popular in Thebes during the late 21st and early 22nd Dynasties. The texts on the piece are very repetitive and do not contain the name of the owner. One of the dowels with which the face is attached is now clearly visible. However, the face, wig, and collar are very delicately painted, and the large, wide-set eyes give the face a unique beauty.

The coffin is probably from the cemetery of Mo'alla at Gebelein. Though the museum's records contain no information on the original purchase of the piece, it has a very close parallel in the anonymous coffin ÄS 9679 at the Neues Museum in Berlin2. This later coffin was purchased from Émile Brugsch in 1886, and was said to come from Gebelein/Mo'alla3.  A further hint as to the origins of the SFSU piece can be found in the letters of Charles Wilbour, who recalls encountering Sutro in Luxor in 1884. Sutro expressed interest in some mummies from Gebelein. Wilbour adds as an aside to the reader that these have recently entered the market and that the dealer Mohammed Mohasseb has some in his stock. The next we hear of Sutro, he has purchased an entire room full of antiquities from Mohammed Mohasseb! Given the parallel with the coffin in Germany, it seems logical to conclude that this anonymous coffin is one of the "Gebelein Mummies" mentioned by Wilbour4.