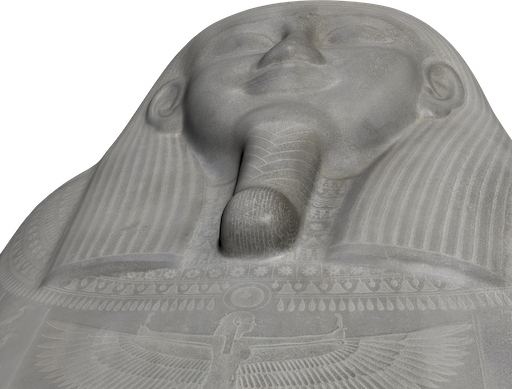 The sarcophagus lid was probably purchased in Feb. 1900 by W. R. Hearst himself, on a trip to Egypt. Though the museum has no records of the purchase, archaeologist George Reisner, who was then working for Hearst's mother, mentions that he met Hearst and that they purchased antiquities together during Hearst's trip to Egypt. The sarcophagus arrived in Berkeley by ship in 1903 and was presented to the museum as a gift from Hearst. Professor Klaus Baer later connected the lid with that found by Barsanti & Maspero in 1900 and published in 19011, allowing us to speculate that Hearst probably bought the coffin from the Antiquities Service in Egypt.  A stela belonging to a man named Psamtik with the same titles and mother was found in the Serapeum2. This stela can be dated to the 26th year of the reign of Amasis in the 26th Dynasty. It also gives us the name of Psamtik's father, who is never mentioned in his tomb3.  The sarcophagus then, would probably date towards the end of the 26th dynasty. This corresponds with stylistic dating based on parallels of both the sarcophagus and tomb 4.

As for the Doctor himself, he was an overseer of an enclave of Libyan mercenaries as well as the Chief of Physicians5. He had the wealth and proximity to the king to build himself a magnificent tomb in the form of a room-sized underground sarcophagus. Of his family, we know very little beyond their names. His mother was named Tagemiraset, and his father was Harsiese.  He may also have been related to a lady named Setjairetbinet, whose intact burial was found in a side-room of his tomb6.

Strangely, the Doctor was never buried in his tomb, and the basalt sarcophagus lid was left propped above its basin, waiting for his body to be deposited inside. Maspero thinks he might have died in the struggles with the Persians that ended the Dynasty7 but Elsasser colorfully proposes that he was executed for malpractice!8 The fate of the doctor will probably remain a mystery.