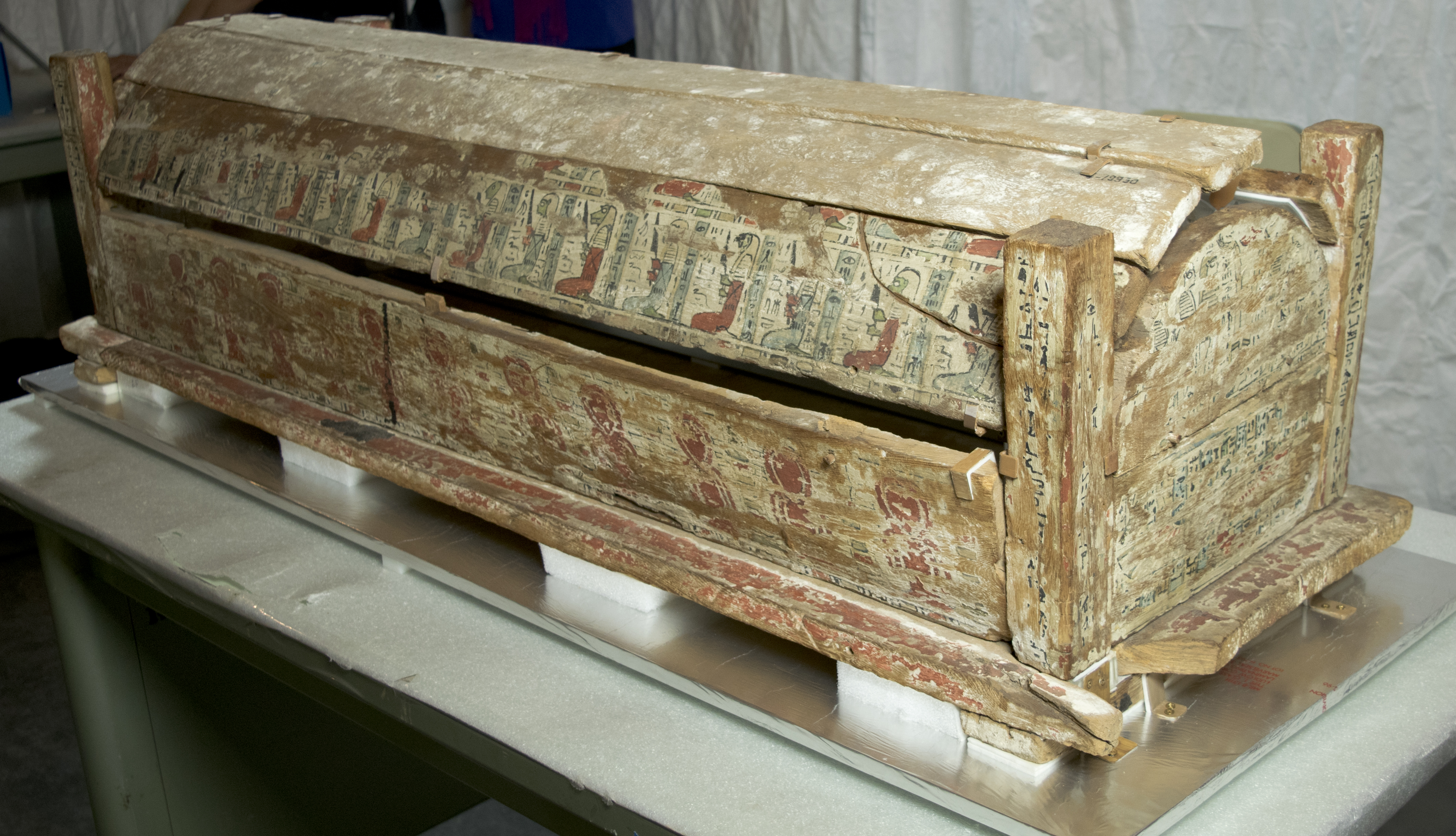 The coffin and the mummy of Patjenef1 that it housed were purchased between 1899 and 1905 by George Reisner for Phoebe Hearst from an unknown dealer in Cairo. It is possible that it was purchased directly from the Cairo Egyptian Museum. The coffin of Patjenef is a four-poster rectangular coffin with vaulted lid. The head-end lunette has iconography from the Book of the Earth (The extended arms are a vignette from this funerary 'book' and have parallels from the 20th Dynasty forward: the most famous example is in the tomb of Rameses IV (KV9), but can also be seen in the Tomb of Osorkon II at Tanis, the Tomb of Pedamenopet (TT33), the Papyrus of Djedkhonsuiwesankh (Louvre 3276), and the sarcophagus lid of Nakhtnebef (Berlin 7).

The rectangular panel below lunette on head-end has a winged image of Nephthys, while the panel on foot-end with winged image of Isis. Both sides of coffin are adorned with alternating pairs of djed-pillars and tyet symbols. The interior bottom of the basin features an image of Nut painted in red ochre on a whitewashed background, and the interior of vaulted lid has four sons of Horus painted in red ochre on a whitewashed background. Each of the two vault planks directly above the sides of the coffin box contains a row of 17 kneeling guardian deities, each holding a knife. Remains of texts and images above the guardians and on the vault planks above indicate another row of similar guardian deities, perhaps for a total of 68 guardians.

The texts consist of statements of protection and benefits for the coffin owner in the afterlife by various deities (Osiris, Sokar, Anubis, Nephthys, Ptah-Sokar-Osiris) on the coffin posts, by the guardians on the coffin sides, by the goddesses Isis and Nephthys on the coffin ends, and in the text accompanying imagery from the Book of the Earth on the head-end lunette. A study of the paleography suggests two hands wrote the hieroglyphic text. Multivalent hieroglyphs allow multiple interpretations of some examples of the owner's name and titles, allowing relevant secondary meanings.

Generally, the coffin is in good condition, but it has one missing plank in the vaulted top, and a missing lower portion of the plank above Side 3 (i.e., the "east" side, if head end is "north" and foot end is "south"). There is some loss of texts on posts and ends of coffin box, and complete loss of text on the central plank of the vaulted top.

1 Text by Barbara Richter, who is currently preparing this coffin for publication.