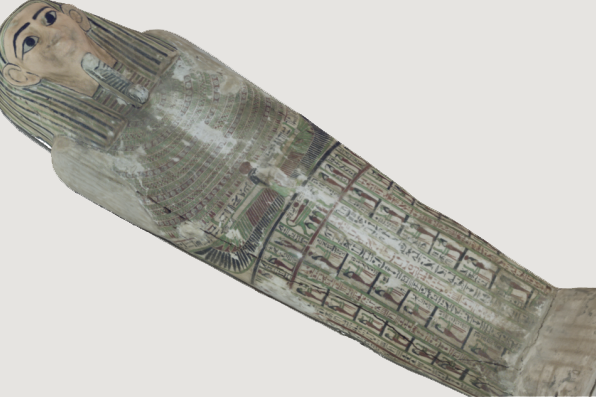 We suspect, because of the style of the his coffin, that Irethoreru may have been buried in Middle Egypt. The beard on the coffin projects from the neck in a solid block, which is a feature that has been noted on several coffins from el-Hibeh1. The back of his coffin appears to have once been decorated with an image of a standing goddess (only the hatching on her dress remains visible) which is a feature characteristic of coffins from the Fayum area 2. In another similarity with coffins from the aforementioned sites, long snakes with their heads at the shoulders of the deceased undulate down both sides of the coffin.

The coffin probably dates from between the Saite Period (26th Dynasty) and the Ptolemaic Period. Irethoreru’s name means “May the Eye of Horus Be Against Them”3—an allusion to the belief in the power of the eye of Horus to ward off evil in whatever form it might take.  Furthermore, Irethoreru bears a unique title of which we have not been able to find another example—“xw-iwa”. We have tentatively translated it as “Protector of the Meat Offerings”. Another possilibity is "Protector of the Heir". His coffin gives the names of members of three generations of his family: his mother, Tabetja4 , his father, Sematawyirdis 5 , and his father’s father, whose name is lost. None of them are known from any other monuments.

All that remains of Irethoreru's grandfather's name is a title (which we originally thought to be the name itself): sA-mr=f. This title gives us an important clue as to where the coffin originally came from. Sa-mr=f priests are a type of priest associated with the syncretism of Osiris and the local god of Herakleopolis Magna, Heryshef6. Perhaps not coincidentally, Heryshef appears on Irethoru's coffin, among the protective funerary deities. This evidence of Irethoreru'a grandfather's title, and the stylistic similarities with Middle Egyptian coffins described above indicate that Irethoreru probably lived and was buried in one of the cemeteries around Herakleopolis Magna, perhaps Abusir el-Melek.

Annotations and translations for this model are coming soon.